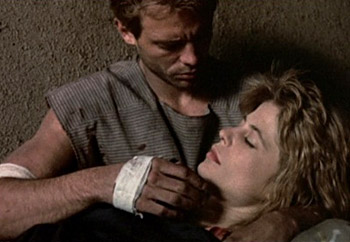 He came across time for this.
"I like you watching me sleep. I miss it."
— Raven doing a very bad job of letting Beast Boy know that she's not interested, Teen Titans
Advertisement:

This is a romantic trope where one half of the couple or potential couple falls asleep and the other one winds up watching them. Sometimes they initially consider waking the sleeping person up, but decide against it upon seeing just how cute and peaceful they look. Very often a soft, tender smile passes over the watcher's face, giving the viewer a hint of their affection towards the slumberer. Hair and/or skin-stroking may also ensue, as well as a Comforting Comforter.

Not to be confused with the type of behavior stalkers frequently partake in. If it's played for a creepy, disturbing effect rather than a sweet and romantic one, it does not belong here. (Although with some works it can be hard to tell.)

May lead to a Dude, She's Like, in a Coma! moment. Compare Sleep Cute. See also Longing Look.