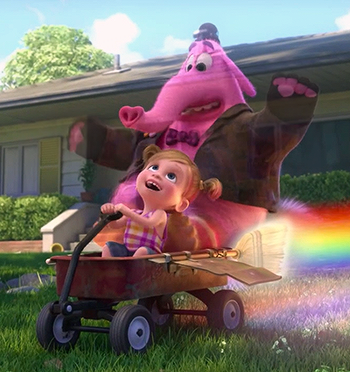 Children in their formative years have a lot of imagination. They also need guidance, support, love, and companionship. And stimulation for their imaginations. Happy, precocious children who are bored or just have more imagination than their parents can keep up with will dream up an imaginary friend - or even more than one.

In cases when the parent is physically present but emotionally and mentally a Missing Mom or Disappeared Dad; or when the child is abused or orphaned or otherwise put through upheaval — they cope by creating a friend from their imagination to keep them company.

The imaginary friend can be a Parental Substitute, confidante, playmate, and sometimes protector (especially if the child has mental issues). If the child has Powers, then their Imaginary Friend, if a genuine product of the child, is bound to be slightly more... substantial than usual.

In darker stories, sometimes the Imaginary Friend is a ghost or extradimensional entity who may not have good and kind intentions toward the child. These can be a variation on Our Ghosts Are Different. Sometimes it's just a manipulative or Jerkass adult preying on the child's imagination and innocence and pretending to be imaginary, counting on adults not believing the child if the child does happen to speak on it.

There are also the odd adult occasions of an adult imaginary friend turning up or hanging around. Sometimes this becomes a Split Personality.

Occasionally, though, the person who conceived of the imaginary friend is an adult rather than a child. In these cases, it is usually portrayed as a part of already-existing madness or else one of the warning signs of the character's Sanity Slippage.

However, as mentioned in the source of the quote above, for better or worse, imaginary friends are becoming a thing of the past. Possibly due to widespread pop-psychology and a lot of hysteria in the '90s about Split Personality, having an imaginary friend was regarded as an indication of mental illness. Some doctors really believed it was an early indicator of dissociating personality, which is supposedly a flight from reality in response to trauma. Moral Guardians warn that they're a sign of Demonic Possession. None of this is true; numerous sociological studies on imaginary friends

have concluded that children, teens and adults have them for many reasons. If we stop mentioning our imaginary friends, that doesn't mean that the friends aren't still around.

Related to I Just Want to Have Friends as the reason imaginary friends are made. Compare with Tulpa, a creature that began imaginary, but formed because people believed in the creature's existence. Contrast with Imaginary Enemy. Super-Trope of Not-So-Imaginary Friend, where the imaginary friend turns out to have been a real person in their own right. See also Girlfriend in Canada, who people think is an imaginary friend, but is sometimes revealed to exist.

The revelation that one of the characters is an imaginary friend is sometimes used as a major plot twist, so beware of spoilers.