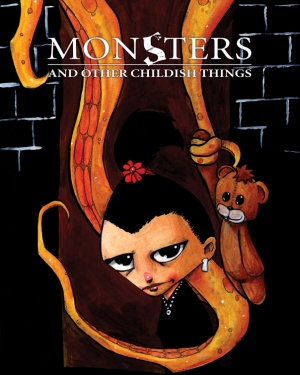 Monsters and Other Childish Things is a comedy horror role-playing game about small children with horrible pet monsters. It is published by Arc Dream Publishing and written by Benjamin Baugh, with illustrations by Rebecca Ivey and Rob Mansperger. Initially available as a 52-page expansion of the Godlike rules in 2007, it was expanded into a "Completely Monstrous Edition" in 2008. This later version is an independent game using its own variation of the One-Roll Engine. The Completely Monstrous Edition was republished in conjunction with Cubicle 7 in a smaller, softcover format as the "Pocket Edition" in 2010.

Monsters can take any form imaginable, but are universally terrible and powerful; they frequently combine elements from Lovecraftian cosmic horror (existing outside of normal dimensions, unnatural physiology etc.) and children's stories. They're The Needless. Not needing to eat, drink or breathe, instead feeding on the emotional connections between human beings - especially children, with whom monsters form special bonds. They love their children and will do anything for them, though they are not necessarily obedient. Three default settings are offered, all varying in both tone and the level of knowledge the world has about monsters.

Stories in Monsters revolve around the normal trials of childhood, aided and complicated by the monsters. The game is explicitly intended as allegory; Baugh says the monsters "represent lots of things". The monsters form bonds only with children because they are more "emotionally exposed" than adults, who have learned to guard their feelings to protect themselves. This combines with the fantastic setting to make a game which is serious in subject matter, but light-hearted in tone.

Dice pools of d10s (usually 10d10 as default) are used to determine the outcome of actions; success is determined by sets of dice which show the same number. In Monsters, the traditional stats and skills are replaced by more childlike descriptions of a person's capabilities; instead of "Strength", "Dexterity" etc. the stats are named "Hands", "Feet", "Guts" and so on. The skills are similarly modified. An important addition are relationships; these are any person or thing important to the character and can add dice to appropriate roles. For example, a kid with a relationship with his mother might add dice to rolls to escape a kidnapper if he fears he'll never see her again. All kids have a special relationship with their monster called the bond.

Monsters do not have regular stats and skills; instead points, each worth five dice, are allocated directly to body parts which can be used to Attack, Defend or do Useful Stuff (movement, senses etc.). Dice allocated to a body part can be sacrificed to gain special attributes; these include adding extra basic abilities (so the same body part can both Attack and Defend), adding more Useful abilities, improving damage, defence or speed, or allowing one die from the pool to be set by the player (before or after the roll, depending on the dice spent on this quality).

As well as the three versions of the main game there have been two alternate setting books (Curriculum of Conspiracy, a middle school, and The Dreadful Secrets of Candlewick Manor, a Victorian orphanage) an expansion (Bigger Bads) and an adventure campaign (Road Trip).