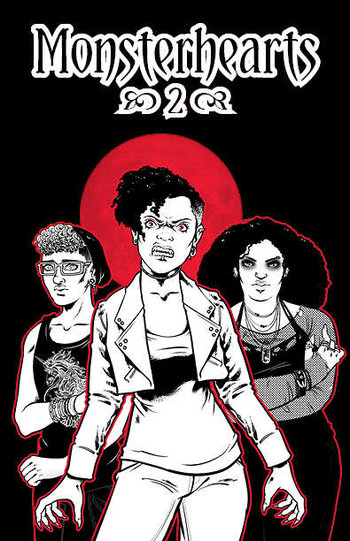 Monsterhearts is a game by Avery Alder about the awkward and messy lives of teenage monsters who are filled with emotional issues. It is Powered by the Apocalypse, an official hack of the Apocalypse World rules, with its mechanics heavily influencing the feel and theme of its setting.

In this game you are not in full control of your character, playing a teenager who is heavily influenced by the decisions of other players and your hormones. Rather than traditional stats, the system uses "Hot", "Cold", "Volatile", and "Dark" to represent the emotional strength and impact of moves. Characters gain "strings" on each other to represent their emotional hold over one another, and can spend those strings for bonuses. There are also Sex Moves, which offer a risk and/ or reward depending on the player's skin, and Darkest Self moves that show when somebody has gone way off the deep end. The game runs mainly on Rule of Drama, and encourages both the players and game master to keep the game interesting and "feral".

The different monster archetypes in Monsterhearts are called Skins. Ten are provided in the main game, which can be purchased at the official website here

. Several official bonus skins (the Serpentine, the Hollow, and the Angel) have been made and can be downloaded here

(near the bottom of the page). There was also a successful Kickstarter

to develop new skins. One, the Selkie, is available on the page. The other six have yet to be released to the public and for now are only available to those who backed the project.

The second edition of Monsterhearts went to Kickstarter