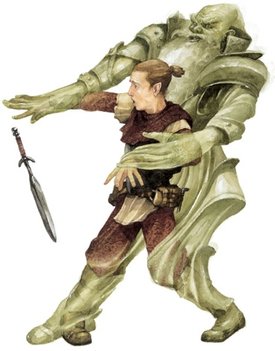 A Living Bodysuit doesn't get a say in who wears him.
Advertisement:

In the process of Demonic Possession, Grand Theft Me, or similar Body Snatching abilities, a Living Bodysuit is a type of Meat Puppet and Host that acts somewhat like that of a Soul Jar, as it allows the hijacker to act from within the character/victim via mental or spiritual projection.

The purpose of a Living Bodysuit varies just like when regarding other forms of Meat Puppets. Usually, the L.B. is used for a disguise, however, sometimes it is also used as a way of gaining immortality, or power via the intellect of the host's mind and experience.

Unlike the average meat puppet, the Living Bodysuit is also completely under the hijacker's direct control (though there are exceptions to the rule); this can usually leave the possessor's real body (if any) prone to attack, due to being comatose without a soul, or mind, which can in itself lead to a Demonic Possession from another Body Snatcher.

Also, should the body of the possessor be destroyed, the hijacker either becomes a permanent resident in the Host (usually the occurrence when regarding soul possessors), or dies along with its physical presence, (this usually happening to mental possessors) thereby freeing the host of control. If the L.B. suffers physical damage from being possessed, it's because of Possession Burnout.

Not to be confused with Living Clothes.