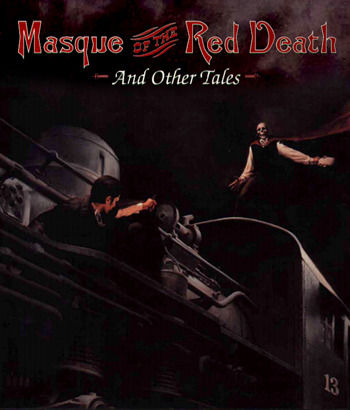 Masque of the Red Death is a campaign setting for Dungeons & Dragons, created by TSR and later expanded by Arthaus Games. Named after Edgar Allan Poe's "The Masque of the Red Death", it was a spinoff of the Ravenloft campaign setting and had several facets in common: it was a gothic horror setting, with mysterious powers, and had restrictions on magic and planar travel. Unlike Ravenloft, it was set in a more modern era, an 1890s version of Earth called "Gothic Earth" —the latter supplement Chronomancy confirmed that this was the same Earth as that of the Historical Reference supplement line.

In this setting, character classes were Retooled to more modern ones like "Athlete," "Criminal," and "Cowboy," and characters received salaries depending on their career. There were magic-using classes (the Adept) and priest-like ones (the Dilettante), along with some others that were rough parallels of the traditional D&D classes.

The eponymous Red Death of this setting was a mysterious force that was not strictly defined in the campaign materials. Several theories were floated in the materials to give DMs something to play with. The Red Death was known to raise undead, make people insane or change them into monsters, and move locations around, as well as a source of magic for other beings. These traits being similar to those of the Dark Powers of Ravenloft strongly hints that the Red Death may be one of their number.

In 2004, Arthaus Games published a sourcebook for Masque of the Red Death, under the Sword & Sorcery imprint, that updated the setting to the 3rd edition of the d20 System. In addition, some of the qabals, and even the Red Death itself, got cameo mentions in the Urban Fantasy settings of d20 Modern.

This campaign setting provides examples of: