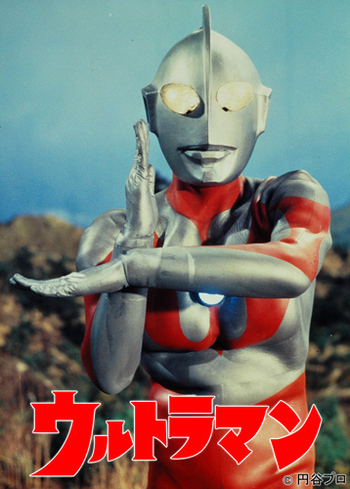 "Our Hero Ultraman".
"From the Land of Light, for all our sakes, here he comes, our Ultraman!"
Advertisement:

Ultraman is a Sci-Fi Super Hero television show in the Japanese Toku and Kaiju tradition, which aired on Tokyo Broadcasting System (TBS) from July 17, 1966 to April 9, 1967, with a total of 39 episodes (40, counting the pre-premiere special that aired on July 10, 1966). It was created by Eiji Tsuburaya from his Tsuburaya Productions, a pioneer in special effects who was responsible for bringing Godzilla to life in 1954.

It is the second edition of the Ultra Series Franchise and the first to have an Ultraman.

The storyline begins in the near "future," established in one episode as the early 1990s. As with the Kaiju movies, e.g., Godzilla and his various oversized playmates, Earth is under the near-constant threat of attack by sinister aliens and giant monsters, most of them focusing, for obviously convenient reasons, on Japan. The Science Patrol, a special international police force, is the only organization on Earth capable of handling this barrage of threats, although even they are consistently overmatched. But little do they know, the second-in-command of the Patrol's Japanese headquarters, Hayata, can transform secretly into the giant super-humanoid from "a billion miles away," Ultraman.

The series begins when Hayata, flying his plane on a routine mission, inadvertently crosses paths with a red sphere of light (called a "ship" in the English dub, but more resembling a red crystal ball) containing Ultraman, who is pursuing an alien monster. Hayata is killed in the crash, and out of remorse, Ultraman merges his life essence with Hayata to resurrect him. From then on, Hayata serves as Ultraman's human form, and depresses a button on a cylindrical device called a Beta Capsule to transform into Ultraman in times of need — almost always at 19 minutes into each 24-minute episode.

Ultraman stands 40 meters (130 feet) tall, weighs 35,000 tons, and is 20,000 Earth years old. He can fly at Mach 5 in essentially the same manner as Superman, has super-strength, and is in possession of various superpowers, sometimes rather surprising ones that only appear once. Most, but not all, of his special abilities involve animated energy beams or rings that he emits from his hands.

Upon first transforming from Hayata to Ultraman, a large disk in the center of his chest, his Warning Light (a.k.a. the Color Timer), shines a steady blue color. However, as he exerts himself, the Warning Light changes to red, then blinks with increasing rapidity, and a helpful narrator informs us, "The energy that Ultraman receives from the Sun diminishes rapidly in Earth's atmosphere. The Warning Light begins to blink. Should it stop completely, it will mean that Ultraman will never rise again."

There's a manga continuation that is serialized in Japan by Shogakukan and in North America by Viz Media that deals with the aftermath of the series when his son continues with his Ultraman duties that has since been adapted into an anime for Netflix in 2019. A Japan Animator Expo short called The Ultraman based on Mamoru Uchiyama's manga was released on September 4, 2015.

Not to be confused with Superman's Evil Counterpart from Earth-3.