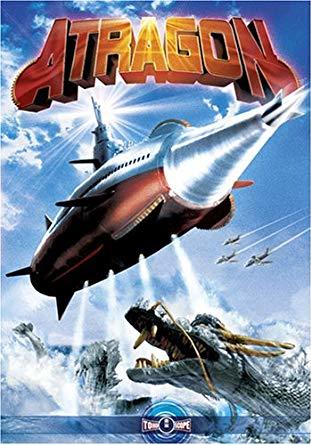 Atragon (aka Kaitei Gunkan, or Undersea Warship) is a 1963 tokusatsu film from the producers and crew of Godzilla.

The lost kingdom of Mu, which sank beneath the sea over twelve thousand years ago, launches an assault to make the upper world their domain again. With an array of weaponry, the Mu Kingdom wages a war with the surface dwellers, who counter with the super-scientific battleship Atragon.

As the Atragon attempts to defeat the Mu Kingdom in their own underwater base, the Mu unleash the legendary sea dragon Manda against the humans.

This movie introduces Manda to the Toho universe, who was later incorporated into the Godzilla universe. It also marks the first appearance of the Gotengo/Atragon, which became one of Toho's signature military battle vehicles. The Atragon appears 2004's Godzilla: Final Wars, which recreates the battle between the Atragon and Manda from this film.

Tropes that apply to Atragon include: