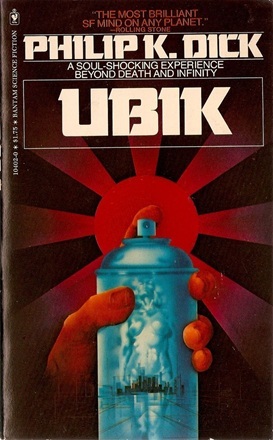 Describe Ubik here? Why, all you need to know is that you want it!

But if you really must know, it's a seminal 1969 science fiction novel by Philip K. Dick, picked by Time Magazine as one of their Top 100 books of the last century. In the future, the proliferation of psychic talents has led, through the process of natural selection, to anti-psychics who can nullify psychic powers. Glen Runciter runs the foremost "prudence organization" in the world, sending his operatives out to protect his clients' secrets, while occasionally consulting his wife and partner in the firm, who just so happens to be a Human Popsicle frozen at the moment of her death in "cold-pac". This allows him to occasionally consult with her before her half-life ends, whereupon she will begin reincarnating (hey, it was the mid-60s; the Bardo Thodol was all the rage back then).

Meet Joe Chip, our protagonist: a technician working for Runciter who's so perpetually broke he has to argue with his (coin-operated) artificially intelligent appliances to get them to work. When one of Runciter's talent scouts comes to him with a Mysterious Waif named Pat Conley, he finds what may be the most powerful anti-psychic talent the world has ever seen. She can rewrite the past itself to counteract precognitive predictions. Chip hardly has time to process this before Runciter whisks the two of them and a handful of others away to the moon for a lucrative operation against his rival, Ray Hollis, head of a psychic spy firm. But the operation quickly sours when an explosion grievously wounds Runciter. The team heads back to Earth, desperate to save their boss by putting him into cold-pac.

However, as the team licks their wounds and wonders what to do next, strange shifts in reality start to happen, seemingly connected to Pat Conley and her "talents". Objects and places regress to chronologically-earlier versions of themselves. Mysterious commercials from Runciter appear on the television that are timed specifically for when Joe is present. Anyone who wanders away from the group is found withered and dessicated, as if consumed by the force of entropy itself. But despite the world unraveling around them, there is still one constant in the chaos: the mysterious product called 'Ubik' that keeps appearing everywhere in time and space, carrying with it a dire warning: "Use only as directed".

And believe it or not, from there on out things get weirder....

The novel was adapted into a PC and PlayStation game by Cryo Interactive in 1998.