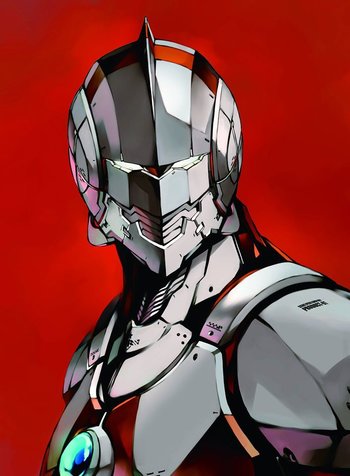 Ultraman Begins
It is [proven that] he will be a real hero. This is the beginning of a new age
— Manga Tagline (The former part is not used in the English version)
Advertisement:

It has been forty years since the events of Ultraman. Separated from the legendary "Being of Light" that had saved the Earth from giant alien invaders time and time again, Shin Hayata has lost all memory of his time as host to the extraterrestrial titan. With the dissolution of the "Science Special Search Party" (SSSP), Hayata has retired to a mundane life, fathering a son named Shinjiro. Things were normal...until Shinjiro, at the age of five, fell from a great height and walked away unscathed.

Things start to unravel as the presence of aliens becomes more and more apparent. With his memory restored, Shin leads the reformed SSSP in creating new Ultramen by means of Powered Armor to defend the Earth. The first candidate to don the mantle is a now 17-year-old Shinjiro.

Helmed by Linebarrels of Iron creators Eiichi Shimizu and Tomohiro Shimoguchi, the manga is an Ultra Series Alternate Universe, ignoring everything that succeeded the original TV series in favor of a timeline where the appearance of extraterrestrials on Earth had much more ramifications and the original Ultraman is the only Ultra to have ever visited Earth. Expectedly, the series also takes a Darker and Edgier approach considering the themes it deals in. It was serialized in Monthly Comic Magazine Hero's before moving to Comiplex.

An anime adaptation has been produced, co-directed by Kenji Kamiyama (Ghost in the Shell: Stand Alone Complex) & Shinji Aramaki (Appleseed) and released worldwide by Netflix as an Original on April 1, 2019. Watch the trailer here

. On June 11, 2019, Netflix announced that it had renewed the show for a second season

with official subtitles provided in English.

It received an Action RPG Mobile Phone Game for iOS and Android platforms developed by DAYAMONZ in Spring 2020, titled "Ultraman Be ULTRA". Though based off of both the Manga and Anime, Be:ULTRA utilizes elements featured in neither, including new Suits based off of other Ultramen from throughout the Ultra franchise.

On October 25, 2021, it was announced that the anime adaptation will be appearing as DLC in Super Robot Wars 30 with Shinjiro, Dan and Seiji participating as playable units. It will be joining base game entry and fellow Tsuburaya Productions anime SSSS.GRIDMAN in the game.