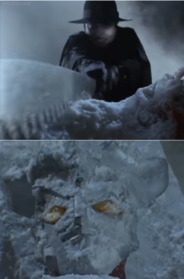 "Now then...let's slice him up with this!"
Ultraman Belial: I am Ultraman Belial Atrocious. I was the one who nearly destroyed this universe.
Haruo Kume: Belial? I thought he was dead!
Belial: My body will soon obtain supreme power. To celebrate, I will soon blow away your planet, demonstrating my might to those fools in the Land of Light!
—Geed, "The Fragments of Hope"
Advertisement:

The Ultra Series is a long-running Toku series and the Ur-Example of the Henshin Hero. Not surprisingly, there are dozens—if not hundreds—of Kaiju and other enemies. Here are the worst.

Entries are chronological by first appearance.