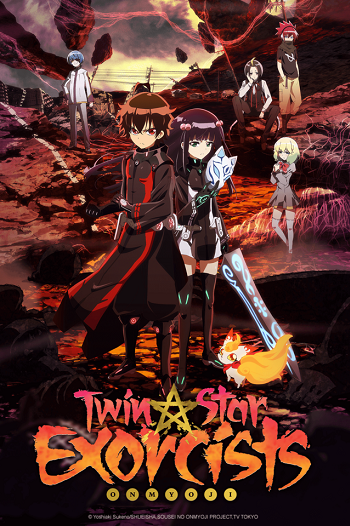 Dangerous monsters, called Kegare ("Impurities") attack unsuspecting people every day. Impurities feed off the energy of humans, and so they are attracted to them. Some people just disappear one day, but were actually dragged off into the Impurities' home realm Magano, never to be seen again.

The only thing standing against Impurities are Onmyouji ("Exorcists"), who have the ability to destroy Impurities by exorcising them.

A young boy, Enmado Rokuro, once wanted to become the strongest exorcist, but an unknown event 2 years ago made him give up this dream. Now, he wants nothing to do with Exorcists. That is, until destiny brings him back into the world of Exorcism...

Twin Star Exorcists (Sousei no Onmyouji) is an anime based on the manga of the same name by Yoshiaki Sukeno, which was produced by Studio Pierrot. The anime spans 50 episodes, with the first few being a generally faithful retelling of the first few chapters of the manga. At 20 episodes in, however, the anime starts to take a different path from the manga, with a story original to the anime, which ran all the way until the last episode. The anime began airing on April 6th, 2016. The final episode aired on March 29, 2017.

Not to be confused with Blue Exorcist, another manga from Jump Square about fraternal twins as Exorcists.