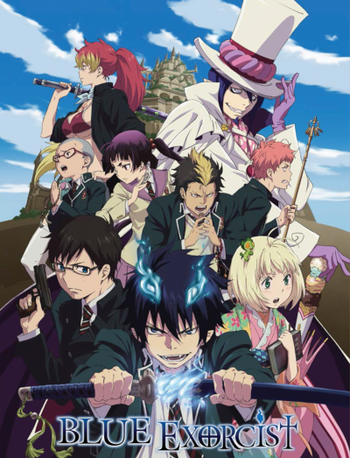 The son of Satan and his allies of justice,
and Mephisto in the top hat.
Mephisto: But Rin, you have chosen a path full of thorns. A sad and painful fate awaits you... so much it will make you wish you had died here.
Rin: I don't care! I'm no longer human, but I'm not a demon either. I can only move forwards! I'll become an exorcist!
Advertisement:

Blue Exorcist, also known as Ao no Exorcist, is an action comedy fantasy Shōnen manga with Multiple Demographic Appeal by Katou Kazue. It began serialization in Jump Square in 2009.

The story revolves around Rin Okumura, who starts out as somewhat of a delinquent prone to bad grades and getting into fights and is often at odds with his adoptive father, Father Shirou Fujimoto over his behavior. One day while job hunting he starts seeing strange things, and runs into a demon for the first time. Just as the demon is about to kill him, blue flames surround his body and burn his attacker. The demon realizes that Rin is the one he has been searching for: the son of Satan.

Rin is saved by Shiro Fujimoto when he comes and exorcises the demon. After a brief lesson on demons, Fujimoto explains that Rin is actually the Son of Satan, a half demon who had his powers sealed until now. He gives Rin the sword that seals his demon powers and tries to see him off, but unfortunately Rin thinks it's all bullcrap and accuses Shiro of throwing him out. Double unfortunately, Satan decides to come in and say hello. Rin saves himself by drawing the sword, but Father Fujimoto dies in the process. After the funeral, he is confronted by Mephisto, a member of the True Cross Order and a friend of Shiro's, and demands to join the True Cross Order and become an Exorcist.

The series largely follows Rin's quest to become the strongest exorcist, make friends, and defeat Satan. It also gives focus to secondary characters, namely Yukio Okumura, Shiemi Moriyama, Shura Kirigakure, Ryuuji "Bon" Suguro, Renzou Shima, Konekomaru Miwa, and Izumo Kamiki. All of which are not exactly who you first think they are; Deconstructions, Reconstructions, Played With, and Subverted tropes abound here, especially in regards to characters.

A 25-episode anime adaptation with music by Hiroyuki Sawano began airing on April 17, 2011. You can find it on Viz Anime

, Crunchyroll (free simulcast) and Hulu. The English dub can be seen on Neon Alley for the PS3 as of October 2, 2012.

It also is now available on Netflix with the option of either sub or dub. The anime is a member of the Toonami block as of February 23, 2014. A new anime covering the Impure King arc aired in 2017

as part of the Winter 2017 Anime lineup. The English dub for the season can be streamed on Hulu.