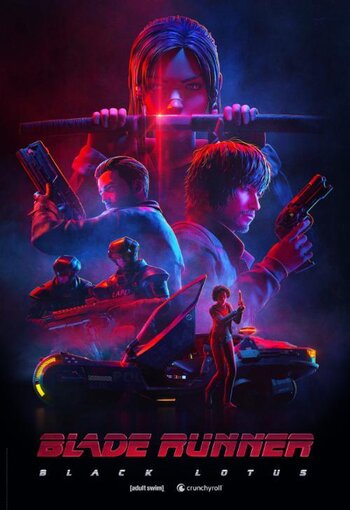 Los Angeles, 2032. A young woman named Elle (Jessica Henwick) suddenly wakes up in the back of a moving truck. She has no memory of who she is or how she got there. All she has is a device which requires a key code to open it and a strange tattoo of a black lotus on her shoulder. While searching for information, the girl runs into trouble, and her memories as well as inhuman combat prowess begin to awaken during the fight. Determined to find out what's in the device, Elle sets out to recover her past.

Along the way, Elle befriends a mysterious junkyard owner and hacker named Joseph (Will Yun Lee) and a pawnshop owner named Doc Badger (Barkhad Abdi). After a couple of violent encounters, a powerful politician is dead and she is now on the run from the LAPD as well as their Blade Runners. She also gains a powerful new purpose: revenge.

A joint collaboration between Crunchyroll and Adult Swim/Toonami, Blade Runner: Black Lotus takes place between the original Blade Runner and Blade Runner 2049. The series was directed by Shinji Aramaki (Appleseed, Ghost in the Shell: SAC_2045) and Kenji Kamiyama (Ghost in the Shell: Stand Alone Complex) and written by Kamiyama. Shinichiro Watanabe (Cowboy Bebop) served as the creative producer (he previously directed the Blade Runner short Black Out 2022).