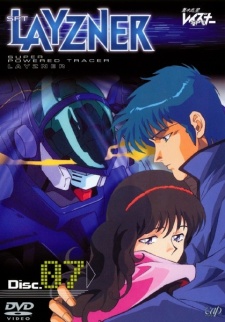 "I came from the planet Grados. My name is Eiji. The Earth is in danger."
Advertisement:

Blue Comet SPT Layzner is an anime series produced by Sunrise between 1985 and 1986. Authored by Ryosuke Takahashi of Armored Trooper VOTOMS fame, it takes place in an alternate 1996 where humanity has advanced enough to travel to Mars and the Moon, and establish settlements there. However, the Cold War is still going on, with ever-increasing tensions between United States of America and the Soviet Union, and the threat of a nuclear war looms on the horizon.

But soon, an unknown menace befalls humanity: on Mars, the members of an exchange program funded by the United Nations to promote peace and dialogue between nations find themselves trapped in a crossfire between four mysterious humanoid robots - three of which begin firing on the exchange program's base, killing almost all of the students. Only a few people survive, but they find themselves isolated on an inhospitable planet that has become a battlefield. And, as if this wasn't enough, the pilot of the fourth robot, who had been trying not to involve the civilians in the battle, actually presents himself to the survivors, introducing himself as Albatro Null, a.k.a., Eiji Asuka, and telling them that the Earth is being targeted for occupation by the far-away Grados Empire...

Although Americans were screwed out of an initial release for this Real Robot show (see No Export for You), /m/subs has completed a full translation here

, including a series of three OVAs whose third and last part corrects the original show's sudden conclusion.