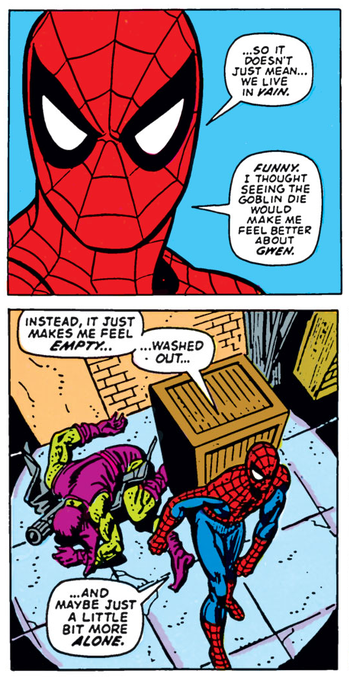 Roman: There you go, you got your revenge. How does it feel?
Niko: I don't know how it feels. I'm trying to take it all in.
Roman: This is the moment you've been waiting for for so long, Niko. What do you mean you "don't know" how you feel?
Niko: I mean I don't know... I feel empty, okay? I feel empty.
— Grand Theft Auto IV
Advertisement:

A powerful plot element, pursuit of revenge may be a driving motivation for a character. It may even be central to the plot, because The Villain Must Be Punished. Upon finally exacting his revenge, rather than the sense of satisfaction he may have expected, an avenger may get... nothing. Maybe it wasn't really worth it, or maybe he just doesn't know what to do with himself now and had nothing else to live for. If these characters were avenging the death of a friend or loved one, they may belatedly realize that the deceased would not have approved or that it will not bring back that person and instead of blind rage, they now have to deal with actual grieving, since rage may have helped them avoid it by putting the blame on their enemy. This is one of the bad results of ignoring Forgiveness.

Confucius said that "Before you embark on a journey of revenge, dig two graves." This is because people who choose the path of revenge have condemned a part of their spirit to be stuck in the past and eventually destroyed which ends up making them worse off than before when the object of their revenge is destroyed by their hands and they feel little to no satisfaction after doing so. And that's not even mentioning how in the process they may well ruin the rest of their lives through the consequences of everything they've done in the pursuit of vengeance.

Related to Wanting Is Better Than Having, Now What?, and Revenge Before Reason. Compare Victory Is Boring.

The other major downside to seeking vengeance is the Cycle of Revenge — somebody may come along bent on Avenging the Villain in turn. For another consequence, see He Who Fights Monsters in which seeking vengeance causes the character become morally corrupted.

Naturally, this trope is the opposite of Revenge Is Sweet, where revenge feels fulfilling rather than empty. Contrast Roaring Rampage of Revenge, which is when some usually enjoy their revenge. However, even those who are enjoying their revenge often feel empty when it's over. Some of them solve the quandary with a Murder-Suicide, which may cross over with Miles to Go Before I Sleep. Can be closely related to Being Evil Sucks in which this trope is more along the lines of "Being Vengeful Sucks".