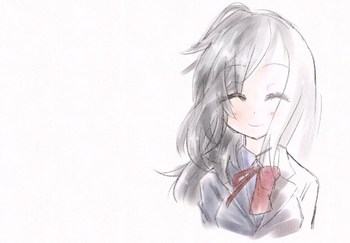 "Thinking back, it was a boring life..."
Advertisement:

is a freeware horror game made by Kanawo of Teriyaki Tomato. A girl named Mishiro Usui commits suicide by drowning herself in a lake, wishing that she had never existed at all before she jumps in. This lands her in another realm known as the Mirror World, where people with a strong wish are sent after they die. Mishiro is told that in order to grant her wish, she must locate all the mirrors containing her reflection and break them. Along the way, she meets Yuzu Hanasaki and Ryotaro Sengoku, two souls also trapped in the same realm.

The game was translated from Japanese into English by vgperson.