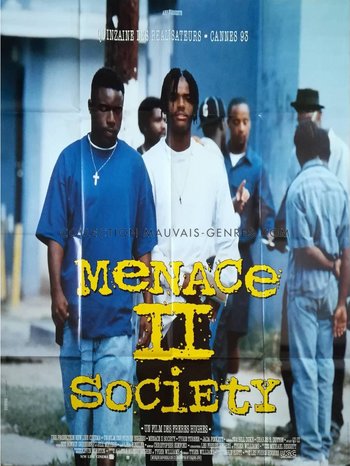 "Went into the store just to get a beer. Came out an accessory to murder and armed robbery. It's funny like that in the hood sometimes. You never knew what was gonna happen, or when. After that I knew it was gonna be a long summer."
Advertisement:

Menace II Society is a 1993 urban drama Hood Film directed by the Hughes Brothers (in their debut). Along with Boyz n the Hood, it is one of the defining films of the early '90s and helped popularize the urban crime drama and the Hood Film.

The story centers around a street life thug named Caine (Tyrin Turner) and his friend O-Dog (Larenz Tate) living in the streets of Watts. Caine is a thug with a heart, and the opportunity to succeed, if the streets will let him. With a father (Samuel L. Jackson) that dealt heroin and a mother (Khandi Alexander) who was addicted to it, he had no chance as a child, and went to live with his grandparents. After graduating high school, a feat that none of his friends pulled off, he had choices to make, and although his heart was in the right place, he was stuck in the wrong time. Watch as he struggles with car jackings, murdered friends, taking care of a single mother (Jada Pinkett) and her son, and a question that burns in the back of his mind, asked by his grandfather: "Do you care whether you live or die?" That answer doesn't come until it's too late.

"After stomping Ilena's cousin like that, I knew I was gonna have to deal with that fool someday. Damn. I never thought he'd come back like this, blasting. Like I said, it was funny like that in the hood sometimes. I mean, you never knew what was gonna happen, or when. I'd done too much to turn back, and I'd done too much to go on. I guess in the end it all catches up with you. My grandpa asked me one time if I care whether I live or die. Yeah, I do. Now it's too late."
Feedback