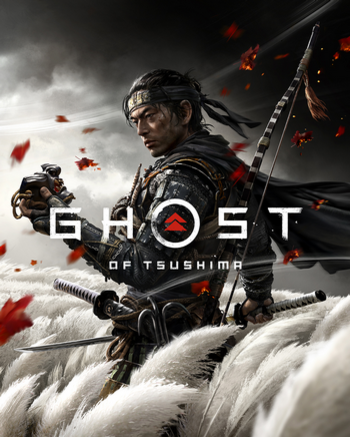 A storm is coming.
"Samurai... you are a warrior, I can see that. You trained your whole life for this, and you have won battles that lesser men have called unwinnable, yes? But while you were sharpening your sword, do you know how I prepared for today? I learned. I know your language, your traditions, your beliefs. Which villages to tame, and which to burn. So I will ask you once again, Samurai... do you surrender?"
— Khotun Khan
Advertisement:

Ghost of Tsushima is a Wide-Open Sandbox Action-Adventure game developed by Sucker Punch for the Sony PlayStation 4. It was released on July 17, 2020.

It is 1274, the height of the Kamakura period. By the law of the Shogunate, the island of Tsushima — located between mainland Japan and the Korean peninsula — is ruled by Samurai lords, who act as both soldiers and nobility in accordance with their Code of Honor. Their word is law, and they have brought rigid order to the once-lawless island.

But this is about to change. Kublai Khan, ruler of the Mongol Empire, has sent his cousin, Khotun Khan, to conquer the Japanese archipelago, beginning with Tsushima. He is a ruthless tactician, and in his first battle he goads the Samurai into a reckless charge, slaughtering them and capturing the Jitō of Tsushima, Lord Shimura.

Only one Samurai survived the battle — Jin Sakai, nephew of Lord Shimura. Nursed back to health by a commoner who found him while scavenging corpses, he sets out to rescue his uncle and drive the Mongols from his home. But with so few allies remaining, and the Mongols seemingly unstoppable, Jin may have to sacrifice everything for this fight... including his honor.

A teaser for the game can be seen here.

A free multiplayer update, one based more on the myths and legends of Tsushima as told in the games Mythic Tales, launched on October 16, 2020. Legends trailer

A movie adaptation, to be directed by John Wick director Chad Stahelski and produced by PlayStation Productionsnote The new division of Sony Interactive Entertainment set up up to adapt their games and IP to film and television, is currently in the works.

Ghost of Tsushima provides examples of:

Example of:
Off with His Head!