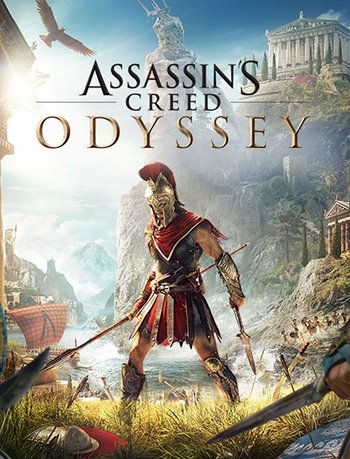 "As you write your odyssey... across the mountains and the seas, remember, the fate of Greece journeys with you."
"Our choices are like ripples on water. They seem tiny and insignificant at the beginning, but they can become devastating tidal waves by the time they run their course."
— Sokrates
Advertisement:

Assassin's Creed Odyssey is the eleventh major title in the Assassin's Creed series, set between 431 and 422 BCE during the Archidamian Phase of The Peloponnesian War. It was released on October 5, 2018 for the Xbox One, Playstation 4, and PC.

Unlike earlier games, which were linear single-player open-world games, Odyssey is an RPG with player customization, leveling, branching paths, and multiple endings based on player actions. It's possible to exercise control over dialogue trees to better control one's character. You play as either Alexios or Kassandra, brother and sister, who both descend from the legendary bloodline of King Leonidas of the Agiad dynasty of Spartan kings. A series of incidents sends you far from home, becoming a mercenary (or misthios in Greek) known throughout the land as the "Eagle Bearer" because of their eagle "pet" of sorts, Ikaros. The Eagle Bearer makes a living in the midst of the ongoing war between Sparta and Athens. As their involvement grows, they come to be embroiled in a conflict with forces behind the war seeking to take control of all of Greece, and the plans said forces have for them and their family.

Free DLC includes the Lost Tales of Greece, a series of quest chains centered around several locales in the Greek world. In addition there is the Discovery Tour, returning after much acclaim from Assassin's Creed Origins. In December 2021, a quest chain (complete with a new area) was introduced as part of a crossover with Assassin's Creed: Valhalla.

The Season Pass includes several Story DLC, three-part episodic stories starting with "Legacy of the First Blade," which features the first person to use the Hidden Blade, Darius. The second DLC, "The Fate of Atlantis," continues the game's storyline (specifically, the Atlantis arc), and has the Eagle Bearer exploring re-creations of realms where the Ancient Greek gods reside, including the afterlife. Season pass owners also get Updated Re-release versions of Assassin's Creed III and Assassin's Creed III: Liberation. Concurrently, a novelization written by Gordon Doherty was released featuring Kassandra as the canonical Eagle Bearer.

The game would receive a sequel, Assassin's Creed: Valhalla, which takes place in The Viking Age and early 9th century Dark Age Europe.

The base game features examples of: