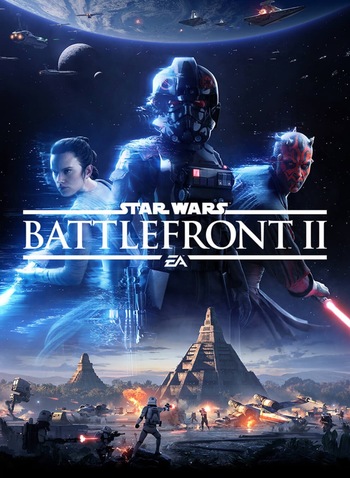 Heroes are born on the battlefront.
"I've been waiting thirty years for this. I still remember my last orders... The day the real war began..."
Advertisement:

This article is about the EA/Dice sequel to the 2015 reboot. For the game developed by Pandemic and released in 2005, go here.

Star Wars Battlefront II is an action first- and third-person shooter video game based on the Star Wars franchise as an entry in the Expanded Universe and sequel to the 2015 Battlefront reboot. The game was primarily developed by EA DICE and Motive Studios (with additional work done by Criterion Games), and published by Electronic Arts. It was released for Microsoft Windows, PlayStation 4, and Xbox One on November 17th, 2017.

The game builds upon its predecessor in every way possible by featuring content not only from the Original Trilogy, but from the Prequel Trilogy and Sequel Trilogy as well. One of the biggest additions is the implementation of a campaign which will shed new light on the fall of the Empire and the rise of the First Order in a canon storyline. Outside of the campaign, the gameplay of Battlefront II does not stick to any sort of canon, instead giving players a sandbox only vaguely referencing the events of the films.