Literature / Over the Wine-Dark Sea 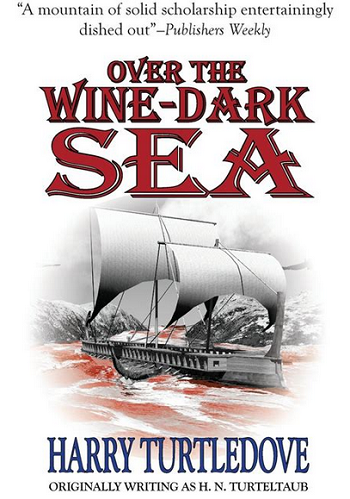 Erinna: Tell me about the voyage. Even if I am a widow, I'm a respectable woman so I hardly get out of the house, except to festivals and such, but you — you get to go across the sea. You know I'm jealous.
Sostratos: You have less to be jealous of than you think. If you feel crowded and closed in here, imagine spending a night at sea aboard an akatos, where most of the men don't even have room to lie down to sleep.
Advertisement:
Erinna: But you see something new every day, every hour.

This is a sea story by Harry Turtledove about Rhodian traders in the Hellenistic era. It concerns the voyage of the trading ship "Aphrodite" to Italy ("Great Hellas") and back and their adventures along the way. The main characters are the cousins Menedemos the captain and Sostratos the purser.

This is the first of the "Helenic Traders" series. Further books are:

The series's title is a reference to The Iliad, where Homer uses the famous piece of description "wine-dark sea" several times.

Over the Wine-Dark Sea contains such tropes as: