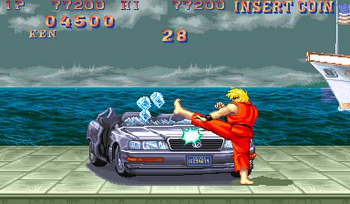 "Oh! My car!"
"About all I could figure out to do was punch things, so I punched some flowers. Yeah, eat that, flowers! And you too, patch of dirt!"
— Yahtzee reviewing Minecraft
Advertisement:

In opposition to the traditional practice of setting games in spartan worlds with Everything Trying to Kill You, recent games try to add realism by inserting a lot of prop objects, such as chairs, tables, televisions, and the like, as well as the almost inevitable crates. These will frequently end up in your way.

There being only so many buttons on the game controller, the user interface is rarely set up to allow any kind of sophisticated interaction with these props. Sometimes, weapons or attacks are your only means of interacting with the world. In such cases, the usual way of dealing with such objects is to destroy them. Quite often, the game will actively reward you for this with various forms of in-game currency or powerups.

As the inclusion of Ragdoll Physics becomes commonplace, expect this to increase, as objects can suddenly become extremely useful as weapons. If destructible objects are useful only to show off how awesome the physics engine is, then you've discovered an example of Wreaking Havok.

Kung-Shui is a close relative that this trope often wishes to emulate.

...And no, the title of this article is neither Welsh nor German for "The chair, the".note Those would be Y gadair, y and Der Stuhl, der!, respectively. The trope also has nothing to do with People Sit on Chairs.

In Legacy of the Void one mission has you fighting in a city. If you destroy one car...
Owner: Oh man, my car! Why does this keep happening?!