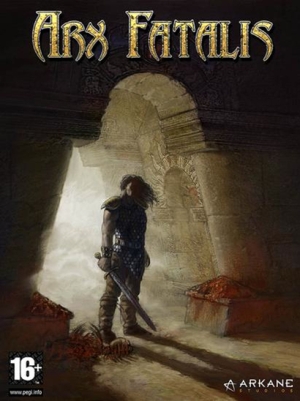 Arx Fatalis, made by Arkane Studios, is a first-person Western RPG/Immersive Sim that was intended as a Spiritual Successor to the Ultima Underworld series, and has become something of a Cult Classic.

Your character wakes up in a prison with amnesia, and soon finds out (unless you watched the intro, in which case, you already know) he is in a world where the sun has burned out and various different races (through a rare moment of cooperation) have been forced to move into underground Dwarven tunnels and rebuild. After escaping, the Human player character heads for the now-underground Human Kingdom of Arx Fatalis in hope of finding his purpose.

The gameplay itself is very free-roaming after the initial tutorial sections, and many sections can be solved in different ways depending on the specialty skills the player has chosen. A notable feature is the magic system, which requires the player to cast spells by making various mouse gestures.