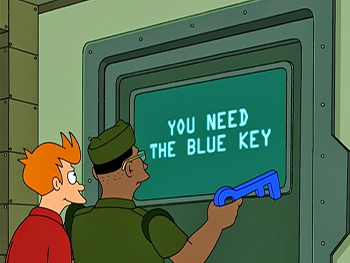 "You need a Level 13 Quest Key to open this flimsy wooden door. Would you rather just kick it open? I mean, I really don't see why you should have to go try and fight that giant dragon and shit when you could just open it with your hands. The wood is really decomposed. But it's your choice, chief. The last two guys decided they wanted to try and get the key. Where are they now? Fucking dead."
—Cracked, If Video Games Were Realistic

One of the Stock Video Game Puzzles. A locked door blocks the main character's way. You have to find the key.

Of course, even if the locked door is a wooden gate with a tiny padlock on it, you can't just bash it down or blow it up. No, not even with the tac-nuke you've been carrying around.

If the key is a Plot Coupon, you've got a Broken Bridge. If the key is actually present, but The Key Is Behind the Lock, the Paper Key-Retrieval Trick may be called for. If the key isn't physical, but instead linked to defeating all the enemies in a room, it's an Inescapable Ambush.

While a literal door and key is the most ubiquitous way to present this trope, this trope can also apply to other objects, such as the "door" being a forcefield and the "key" being an item that turns off the forcefield.

Compare Solve the Soup Cans. May require the attention of a Master of Unlocking, but if even he can't get past it without the key then you've got a Plot Lock. Subtrope of Lock and Key Puzzle.