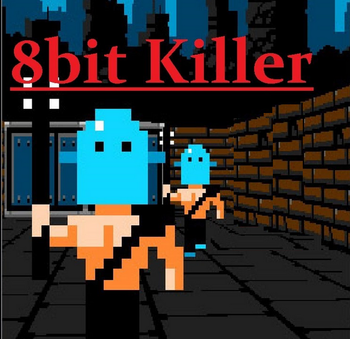 note There's no hyphen in the title. is a Freeware First-Person Shooter developed by Locomalito and released in 2008. Set in the middle of the 22nd century, the game puts you in the role of a lone soldier working for La Résistance, who are fighting Master Brain: an alien who promised a new dawn after mankind's own long and destructive war, but instead raised a massive army and launched an assault to destroy the last of Earth’s few remaining cities.

The game features an 8-bit aesthetic, with entities appearing as 2D sprites in a 3D world constructed from flat textures (visually similar to games like Wolfenstein 3-D), 1-bit sound effects and a chiptune soundtrack by RushJet1. The game is 4 chapters long – each chapter consists of a linear first stage, a labyrinthine second stage where you look for keys to progress through locked doors and the third and final stage where you fight the boss of the chapter. During the game you’ll find progressively stronger weapons and extensions to your Life Meter and ammo capacity.

Locomalito would go on to create L'Abbaye des Morts, Hydorah, Maldita Castilla and The Curse of Issyos, all of which are similarly retro-styled.