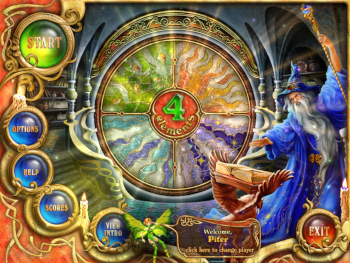 4 Elements is a Puzzle Game by Playrix that combines elements of Hidden Object Game, Match-Three Game, and spot the difference genres released in 2008. A sequel called 4 Elements II was released in 2011.

Somewhere far away, there is a beautiful land, which has been prospering for a while. One day the idyllic lifestyle has ended, as the elements became more hostile and turned the land inhospitable. The wise mage explains it's all because the magic altars have been destroyed, and now it's up to you to save this fairytale landscape, with a fairy guiding you along the way.

Each book corresponds to an element: earth, fire, air, and water. The first level of each book has you find pieces of four items that are scattered around the room, which reveal the key to the book once complete. After that, the game alternates between four connect-three levels where you have to destroy tiles to drive energy to the altar before time runs out, then a spot the differences level where you search for differences between a true and altered magic card. Once it's done four times, you move on to the next book and repeat the process.