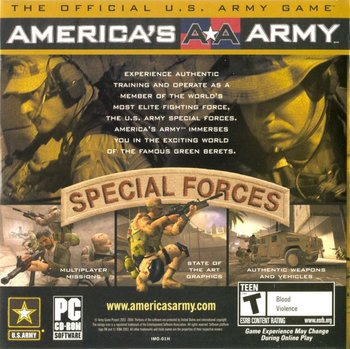 "The more you sweat in training, the less you bleed in combat!"

Somewhere around the crack of the 21st century, higher-ups at the United States Army sought for a way to remedy their waning recruitment rates and number of new recruits dropping out of training, and came up with a plan to get American teenagers interested in joining the Army: A freenote (except to American taxpayers, who pay about two cents each for the project even if they don't actually ever use the game themselves) online First-Person Shooter based on Counter-Strike that educates players on the Army's principles and technical aspects through simulated "first-hand" experiences.

America's Army 3 managed to garner itself some infamy its first week of release, with the game being hardly functional at all, as the 8,000 people who attempted to play apparently overloaded the servers. The problem was largely solved in short order by preventing the players from needing to do the training and has since been rectified. After the release of the third installment, the entire development team was fired and development transferred to an internal Army development team who updated the game much more frequently than the previous team did.

After the success of America's Army, similar projects were started by the Canadian Army

(which now redirects to the U.S. Army's general recruiting website, GoArmy.com). The U.S. Army shut down the project on May 5, 2022 with online features such as stats and rankings no longer functional. Private servers can still be created & played on.