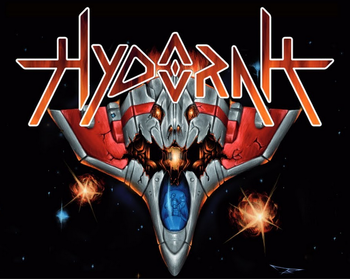 HYDORAH IS BASED ON 80'S GAME STANDARDS. IT WILL REQUIRE SOME TACTICAL PLAYING SO, SHOW YOUR POWER OR PREPARE TO DIE!
— Warning Message

Hydorah is a freeware horizontal Shoot 'em Up by Locomalito that takes after classic arcade games, namely games like Gradius, Xexyz, R-Type, and Darius. Needless to say, it is somewhat difficult. Pick it up here

It got an Updated Re Release in Super Hydorah, Released in 2017 for Steam, PlayStation 4, Xbox One and in 2018 for the Nintendo Switch. This adds a few new levels, bosses, and power ups.