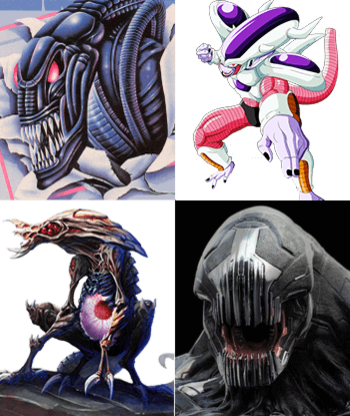 In space, no-one can hear your copyright claim.note L - R, top to bottom: The creature from Xenophobe, Frieza's third form, a Zeta Metroid, and an Outrider.
Freeza: So, Namekian, what do you think of my third form?
Piccolo: I think Ridley Scott's gonna sue somebody.
Freeza: What are you talking about? [a second mouth pops out of his original]
— Dragon Ball Z Abridged
Advertisement:

This trope describes a creature partially or completely based on the eponymous Alien, also called the Xenomorph, from Ridley Scott's Alien, designed by H. R. Giger. The creature might look completely different or just have a few obvious parallels.

Why? Because the Xenomorph is one of the most iconic horror monsters in cinema, and just looks wrong. It's weird, it's viscerally creepy, and its method of killing people is incredibly creative. Its reproduction method is memorable, the life cycle remains horrifying... so naturally once the Alien movies got popular everyone wanted one of their own. But this is not limited to film — depictions show up in almost every medium, especially during the late '80s and early '90s. Nowadays it doesn't quite have the same impact.

Signs of a xerox include:

Additional, optional criterianote Which are not about the creature itself, but its interactions with others. include:

Many Bug War plots from older science fiction tend to feature Insectoid Aliens whose attributes often made them prototypes for Xenomorph Xeroxes. See also Raptor Attack for the carnivorous dinosaurs that share some of the same general physique and attack style with the adult Xenomorphs.