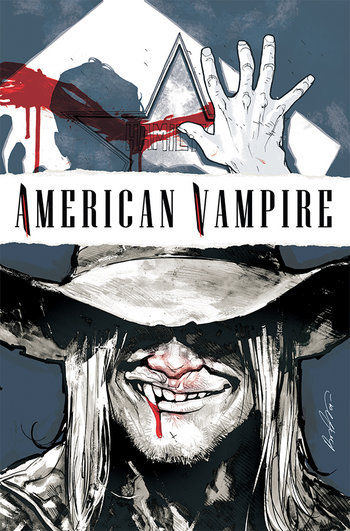 American Vampire is a comic book from Vertigo Comics.

The comic is written in arcs, each set in a different time period and locale. The first arc follows Pearl Jones, a girl struggling to make it big in Hollywood in the 1920s. The second arc follows Cashell McCorgan, a police officer during The Great Depression. The third arc follows Henry Preston joining a team of Vassals of the Morning Star agents to investigate rumors of vampires in the Japanese islands, against the backdrop of World War II. The fourth arc follows Travis Kidd, a young rockabilly vampire hunter in the 1950s as he crosses paths with the Vassals. The fifth arc follows one of the survivors of the Taipan mission, who has now become a vampire. The sixth arc reunites Pearl Jones and Skinner Sweet in 1950s Hollywood, during the Red Scare.

The book is written by Scott Snyder and illustrated by Raphael Albuquerque. Stephen King wrote "Skinner Sweet", a back-up feature for the first arc detailing the origins of the original American vampire.

The Series was followed by: