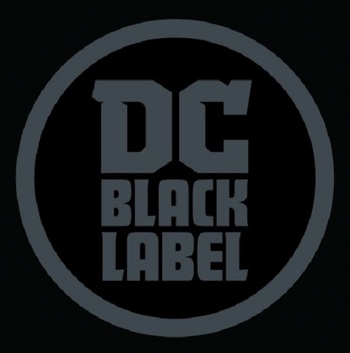 Black Label is an imprint of DC Comics.

Black Label focuses (but not exclusively) on elseworld and out-of-continuity stories about some of The DCU's most popular characters, written and drawn by prominent creators in comics.

Most of these are new titles original to the imprint, but reprints of older stories that fit the Black Label ethos (e.g. Kingdom Come) are also included in the line.

The first wave of Black Label titles began in Fall 2018, with Batman: Damned (by Brian Azzarello & Lee Bermejo) serving as its inaugural release, while 2017's Batman: White Knight was folded into the imprint with its first graphic novel printing.

With the closure of Vertigo in 2019, it was announced that the few remaining Vertigo titles would be transferring over to Black Label, with the imprint being retooled slightly as the home for all DC's mature readers material, probably including Vertigo reprints being given Black Label trade dress. This includes the books published under The Sandman Universe brand.

Following the DC layoffs of 2020 — which notably included both major editors from Black Label — the company announced plans to significantly scale back the imprint, shifting its focus from new books to reprinting older stories like The Killing Joke. This is in line with DC editorial's stated goals to make their overall output more family-friendly and more aligned with the "franchise brand" in 2021.