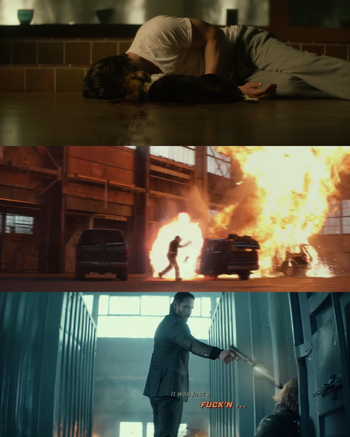 They shouldn't have killed his dog.
"Looked dead, didn't I? But I wasn't. But it wasn't from lack of trying, I can tell you that. Actually, Bill's last bullet put me in a coma. A coma I was to lie in for four years. When I woke up, I went on what the movie advertisements refer to as a 'roaring rampage of revenge.' I roared. And I rampaged. And I got bloody satisfaction. I've killed a hell of a lot of people to get to this point, but I have only one more. The last one. The one I'm driving to right now. The only one left. And when I arrive at my destination, I am gonna kill Bill."
— The Bride, Kill Bill
Advertisement:

She's making her list, she's checking it twice, and she's checking off your name after she's killed you nice, probably for making it personal. And in the above example she's even quoting her own movie poster blurb. But it's okay, you deserve it — because you're evil, you kidnapped her child, and you probably kicked her dog (if not worse) as well. Either you're a minion or you're the Big Bad behind it all, but it doesn't matter in the end because either way, you're going down… and Alice or Bob is going to be the one to do it, even if it means going down with you.

The Roaring Rampage of Revenge differs from the standard Revenge plot in that our hero dispenses with the Machiavellian plotting that would define a classic revenge tale and goes straight for the bloodshed, either in a single, violent Unstoppable Rage or Tranquil Fury-fueled rampage on the bad guy's home base, or a more methodical "working one's way up the food chain" from lesser foes to the bigger fish.

If the hero has a specific hit list, this usually ends up as a Gotta Kill Them All situation as the hero hunts down and kills each bad guy on the list before moving on to the next. In most cases, the second to last bad guy on the hit-list is the Dragon for whichever Big Bad that the hero has saved for last, and is usually someone the hero has an especially personal beef with and/or is the most psychotic or otherwise hateworthy foe on the list aside from the Big Bad. If the hero decided a rampage wasn't enough, the hero may resort to an Extreme Mêlée Revenge to let the bad guys feel the pain with a truly savage beating.

Alternately the reasoning is that the hero just has a single lead, and each lead gives him/her one more name or clue before they die.

Of course; sometimes the Hero's target is not so specific as one person. Sometimes it can branch out to an entire organization, or to an entire race or species. Some examples of this could be a partisan whose family was killed by soldiers on a Rape, Pillage, and Burn raid (and who in retaliation is killing as many soldiers from that army as possible), or an apocalypse survivor whose son was killed by zombies (and who as a result devotes his life to ridding the world of them).

Many such avengers may keep a Tragic Keepsake to remind them of their lost loved one or other reason that they're on this vendetta to begin with, although they may fall victim to Forgotten Fallen Friend if the quest goes on long enough. Sometimes fulfilling the revenge may end up as a case of Vengeance Feels Empty and not give the avenger the expected joy, particularly if they come to feel that the avenged would not have wanted it that way. While in some cases, fulfilling the revenge may instead end up with the avenger becoming bloodthirsty and developing a Blood Knight personality, or worse, Put the "Laughter" in "Slaughter". But sometimes, one will simply find that Revenge Is Sweet without any moral corruption, with the closure of revenge allowing the avenger to move on with their lives.

Would-be avengers need to be extremely careful about falling into He Who Fights Monsters territory. It's one thing to take revenge on someone who is directly responsible for wronging you, but it's quite another to extend your revenge to that person's children, people who are only tangentially related to the main target, and any innocent bystanders unlucky enough to get in the way. If this happens, then The Hero may cease to be worthy of that title.

Compare Last Stand, where the motives are frequently the same. May be a case of Revenge Before Reason culminating in a Self-Destructive Charge. In other cases, the anger has burned itself out by the end, leaving only a dogged Determinator to finish the task. Also compare to Roaring Rampage of Rescue, where the goal of the rampage is to rescue a loved one rather to exact revenge for what was done to them. The two may overlap, particularly if the rescuers fail to save their loved ones and settle for avenging them.