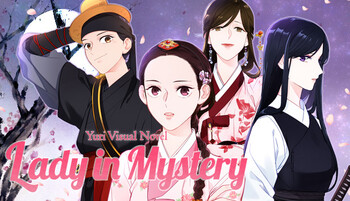 Lady in Mystery is a yuri visual novel created by nolsoft. It was originally released in Korea on January 12, 2012, and it was localized for a Steam release on May 15, 2021.
Advertisement:

Five years ago, Heesoo's father was accused of treason and her entire family was executed. In order to avenge her family, Heesoo disguised herself as a man so that she and her servant Woosung could pose as a pair of brothers. The two set up a detective agency that handles a variety of cases, all the while searching for any information that would help them get revenge. Along the way, Heesoo finds herself becoming entwined in the lives of four women: the runaway noble Juhee, the stern-looking police officer Seoyeon, the sultry merchant Yurin, and the virtuous thief Iljime.

Heesoo soon finds herself not only having to deal with trying to clear her family name, but also having to confront possible romantic feelings towards one of the ladies.

Lady in Mystery contains examples of: