Visual Novel / Ladykiller in a Bind 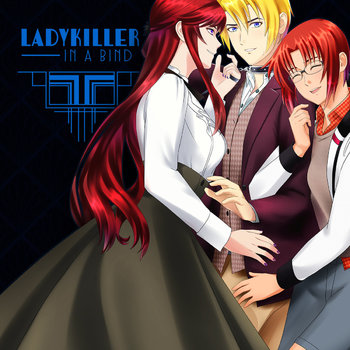 My Twin Brother Made Me Crossdress As Him And Now I Have To Deal With A Geeky Stalker And A Domme Beauty Who Want Me In A Bind!! or Ladykiller in a Bind is an eroge Visual Novel developed by Christine Love. It was released in 2016 on Humble Bundle and in 2017 on Steam.
Advertisement:

The Beast is a motorcycle-riding, leather jacket-wearing, sex-addicted butch lesbian with a reputation for being quite the heartbreaker. However, she's not doing well at school, so her very rich daddy might take her bike away. Her Half-Identical Twin Brother, the Prince, is a Manipulative Bastard who's on top of the social pile at his Elaborate University High. He'll help her out, for a price — his class is going on a fancy one-week cruise, and he wants her to infiltrate the cruise disguised as him, and win a popularity contest in his place.

Winning the contest is a bit of a daunting task for the Beast, as her brother is (rightfully) known as quite the notorious douche amongst his peers. This means she will have to do a lot of legwork to swing some votes in his favor, but she must at same time careful not to raise too much suspicion by acting overly nice or kind — as this would be seen as rather out of character for him — lest she be exposed as an imposter, and spend the rest of the cruise locked in the cargo hold. At the same time, though, there are plenty of hot young women along on the cruise; who is to say that the Beast cannot try to get to know some of them a bit more intimately?