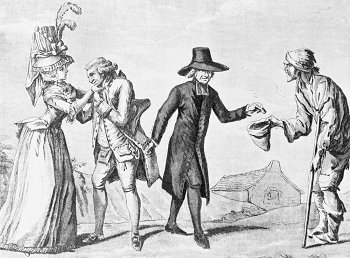 Monsieur Hood: "I steal from the rich, and give to the needy!"
Merry Man: "He takes a wee percentage-"
Monsieur Hood: "But I'm not greedy!"
— Shrek
Advertisement:

In essence, a thief or other kind of criminal, usually of the gentleman kind, who targets people who probably deserve it in order to help the downtrodden. Robin Hood, is, of course, the Trope Namer and in his original stories actually not a strong example, robbing mainly from the governing elite, but not necessarily for charity. Sociologists have noted that these characters tend to enjoy their greatest popularity during times of economic recession or (especially) depression.

Depending on the writer, this kind of character can be anything from a hero to an Anti-Hero to an Anti-Villain, but they are rarely ever portrayed as outright villains. Academic texts sometimes use the term "Social Bandit" to describe these kinds of characters. Usually Chaotic Good.

Can also be used more generally to describe a mysterious or eccentric character who is unmistakably a foe of tyranny and a (usually superficial) friend to ordinary folk, especially if large doses of Think Nothing of It are present. A common trait of the Depression-era Proto-Superhero.

Compare and contrast Karmic Thief, who similarly targets oppressors but neglects the whole "give to the poor" bit.

The Name is Johnnie Lee

Owen describes Cole as an outlaw with a heart of gold who robs the rich and uses the money to buy beans for the poor.

Alternative Title(s): Rob From The Rich And Give To The Poor

The Name is Johnnie Lee

Owen describes Cole as an outlaw with a heart of gold who robs the rich and uses the money to buy beans for the poor.