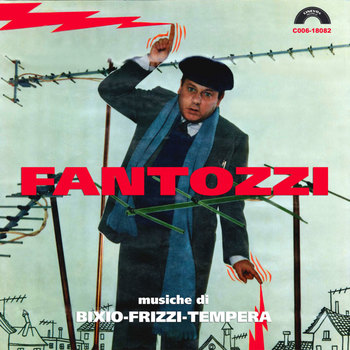 Long-running Italian movie saga based on the eponymous books by Paolo Villaggio. It's the tragically comical story of the clumsy and unlucky accountant Ugo Fantozzi, played by Villaggio himself. The movies have no real plot. The endless disgraces and misfortunes of the main character are shown in a variety of sketches and sequences full of slapstick and Black Comedy.

Ugo Fantozzi is a grotesque parody of the Italian White Collar Worker of the 1970s. A mediocre man who is extremely apathetic and frustrated with his life, both at work and at home. Married to a plain and homely housewife, father of a monstrously ugly little girl, Fantozzi works for a huge company known as "Megaditta" (literally, "Megacompany") where he's endlessly abused and humiliated by his co-workers and bosses (in-universe known as mega-directors), rejected by his "dream woman" Miss Silvani (a shallow, opportunistic, and rather ugly Manipulative Bitch) and gets into every sort of catastrophic situation.

The first movie aired in 1975. It has 9 sequels but, depending on whom you ask, only the first few movies are worth watching (though there are also people who enjoy later movies). In Italy, much of the dialogue, especially in the first 3 films, is still source of Memetic Mutation, and the term "fantozziano" has become an adjective to describe a hapless, unlucky person.