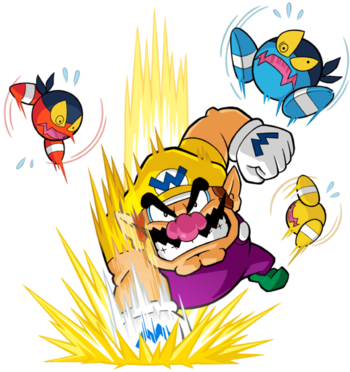 When one (or several) of a character's attacks involve violently punching or otherwise striking the ground. This will, more often than not, produce the character's desired results (a Shockwave Stomp, or similar to a Super Rug-Pull, for example), rather than simply breaking their hand. When done with a weapon, this is a Sword Plant; Ground Pound and Ground-Shattering Landing (when it's done with the body) are also related. Overlaps with Dishing Out Dirt if the end result is a localized earthquake.

Wyzen kills a Gohma with a drop-punch from his ship.

Wyzen kills a Gohma with a drop-punch from his ship.