open/close all folders
The Scotsman 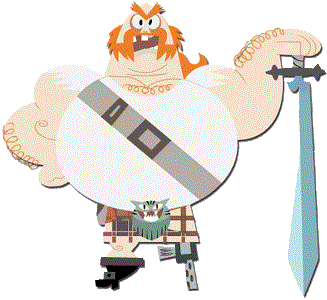 "By the look on yer face, I can tell ye like the sound of the pipes, wee laddie."
Click here to see the Scotsman as of Season 5. 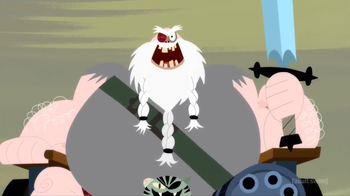 Click here to see the Scotsman one with the Celtic magic. (MAJOR SPOILERS). 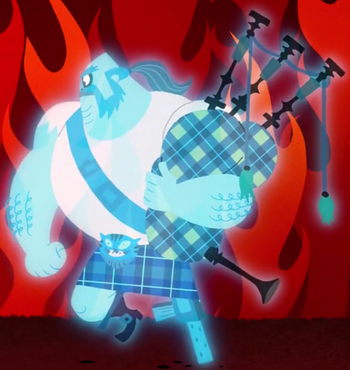 A large and very loud Scottish man, with a sword inscribed with magic runes and a machine-gun false leg. He's about as burly a warrior as you'll find, and one of the few creatures able to match Jack for combat prowess. Their initial meeting (based on the tale of Robin Hood and Little John's first encounter) resulted in a fight that went on for fifty hours, still without a clear victor, and it was all started because they met each other going different ways on a rope bridge that was too small for either of them to pass the other, and neither one of them wanted to go back the way they came. Fortunately, the two buried the hatchet when circumstances forced them into Teeth-Clenched Teamwork, and the Scotsman became Jack's best friend and ally in the future.

He also has a wife, who is even more frightening than he is. Just don't tell that to her face.

He returns in Season 5. 50 years later, he's gotten much older, but managed to keep up the fight and raise a veritable army of daughters. Upon meeting Aku for the first time, the fight takes an unexpected turn that actually works in his favor.

The beloved (and, usually loving) spouse of the Scotsman. A woman of considerable size and powerful moods, good and bad. When enraged, she becomes an elemental force of raw destruction (and insults). 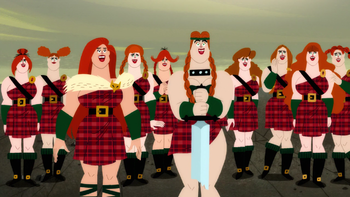 The many offspring of the Scotsman and his Wife, whom he has trained as soldiers for a rebel army against Aku. Their names are Flora, Maeve, Isla, Bradana, Murdina, Alana, Oban, Ardbey, Fiona, Assie, Bonnie, Lorna, Mawina, Shona, Nora, Piesil, Shanath, Euspeth, Edme, Freya, Gilbartha, Gesha, Grizela, Innes, Dawntha, Cora, Davina, and Kina. And those are just the ones he named before Jack cut him off.

Flora is essentially the face and leader of the troupe of daughters, though there's no indication if she's the firstborn child. Nevertheless, she is the one who is closest to her father, wears a headband unique to her, and is the only one who says more than "Dad" in an embarrassed tone.