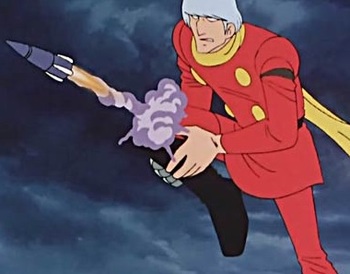 He can shoot a rocket from his shooooe! 'CAUSE HE'S A CYBORG!
A Sub-Trope of Unusual Weapon Mounting and sister to the Arm Cannon, the Leg Cannon is a cannon mounted on a leg, hidden in a leg, or IS the leg. Expect many of the same features as you would on an Arm Cannon, such as Bottomless Magazines and being fired on thought alone, if only because you could not easily reach a trigger mounted on your own shins.
Advertisement: