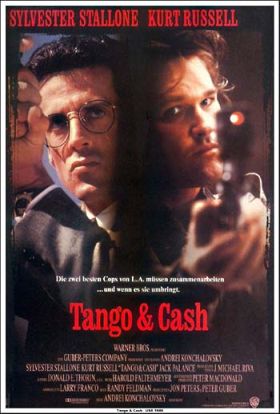 You almost want to take it seriously...
Advertisement:

The story centers on two rival Los Angeles policemen: dapper, straitlaced cop Raymond "Ray" Tango (Stallone), and aggressive, rough-around-the-edges cop Gabriel "Gabe" Cash (Russell), and their attempts to outdo each other. But when an arch-enemy of theirs, drug lord Yves Perret (Palance), decides to even the score and frames them for murder, Tango and Cash suddenly find themselves among the same prisoners they had put away themselves. It doesn't take long before they realize they're going to have to put aside their differences and work together in order to get even with Perret and clear their names, even if it ends up killing them.