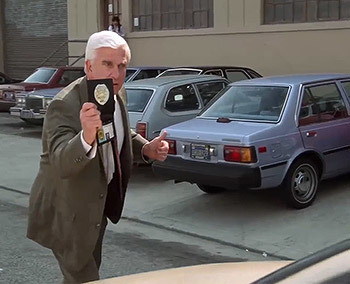 Phelps: LAPD! I need your car!
NPC: I pay the city all these goddamn taxes, and you have to take my car!?
— Typical exchange from L.A. Noire
Advertisement:

The bad guy is fleeing the scene of the crime in a vehicle, and our hero officer is without his or her car at the moment. No problem, he just hops in front of the next car that comes down the street, flags it to a stop, flashes his badge, and commandeers the vehicle.

The occupants will either gladly surrender their car, or only offer token resistance, maybe a confused "Hey! What's going on?" as they are unceremoniously dumped in the street.

If the Hero can't convince them to give up the vehicle, or can't drive a stick, expect the person to become an all too enthusiastic participant in the chase anyway, as being able to ignore all road rules is a wistful fantasy to just about everyone.

This is, in fact, legal, though uncommon, in most of the United States, and if your car is damaged you're not likely to see any compensation for it unless it's totalled or unless you live in certain states. The Straight Dope

has details. How quickly an officer can persuade a person to give up a vehicle is another matter.

See also Hero Stole My Bike, Follow That Car. If the hijacker doesn't actually have the authority to hijack the car, it's a Bavarian Fire Drill.