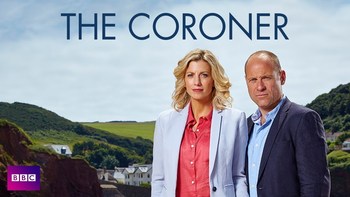 The Coroner is a BBC drama series set in the fictional South Devon coastal town of Lighthaven. Jane Kennedy is a high-flying solicitor who finds herself returning to her hometown after yet another failed relationship. She ends up taking the post of local Coroner, and finds herself working alongside Detective Sergeant Davey Higgins, the man who broke her heart back when they were teenage sweethearts.
Advertisement:

Jane and Davey investigate any sudden, violent or unexplained deaths that happen in the South Hams district, and often find themselves having to work together to find out what is really going on behind the scenes. There's also a lot of Unresolved Sexual Tension between Jane and Davey, though it has yet to come to anything. Jane also has to deal with her somewhat eccentric mother and step-father, and her moody teenage daughter Beth.

The Coroner ran for two series, with ten episodes in each, before being cancelled in March 2017. However there is currently a petition

to bring the show back for a third series. Not to be confused with the Canadian series Coroner.

The Coroner contains examples of: