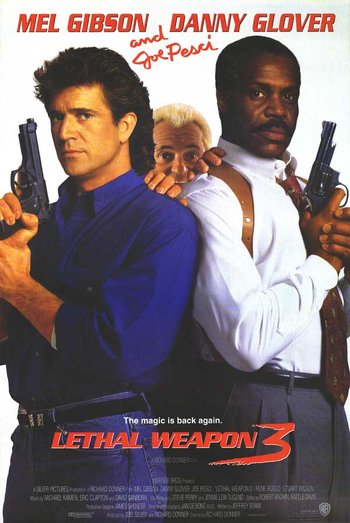 Captain Murphy: Wait a minute! Look, maybe these guys can contribute something to this case.
Detective Ernie: From what I've seen of their records, the only thing they do contribute is mayhem and chaos.
Martin Riggs: No, I'm Chaos, and (referring to Murtaugh) he's Mayhem. We're a double act. What are we, required reading, or something?
Lorna Cole: As a matter of fact, you are. It's a cross between Police Gazette and MAD Magazine.
Advertisement:

Lethal Weapon 3 is an action / buddy cop film and the the third instalment of the Lethal Weapon series, directed once again by Richard Donner and released in 1992. It stars Mel Gibson, Danny Glover and Joe Pesci once again.

Riggs finds a new Love Interest in Lorna Cole (Rene Russo), a fellow cop who is as tough and crazy as he is. She helps them to investigate a rogue officer who's been selling specialized armor-piercing "cop killer" bullets to the mob and onto the streets. Looming over Murtaugh's head is his upcoming retirement and trying to figure out his life as a cop and what it will be like after retirement.

Riggs: I think you better get your girdle out of mothballs, Rog.
Murtaugh: Oh yeah, we're gonna be back in uniform again!
Riggs: Well, if you find one that fits.
Murtaugh: Ten more years of this, ten more years...

Murtaugh and Riggs: I'M TOO OLD FOR THIS SHIT!