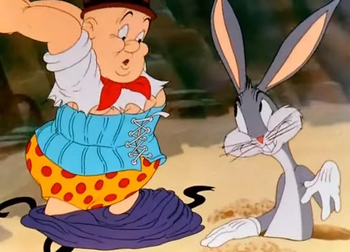 A character comically dons a corset or a girdle, usually to conceal a gut. In some variations, the unfortunate garment will burst, after being put under far too much strain.

There are two main ways this is used:

Always Played for Laughs, but if the corset wearer is attractive it can loop back around to Fanservice. Similarly, if the owner of the corset is not attractive or very overweight it can become Fan Disservice.

Unlike Of Corsets Sexy, this trope is fairly unisex, probably because the idea of a male wearing a girdle is funnier, and more indicative that the wearer is vain, pathetic and ridiculous. The exposure of a girdle is often used as part of a Humiliation Conga, especially if the character is unsympathetic. Most likely to happen to a Fat Bastard, a Narcissist, a Small Name, Big Ego, The Prima Donna, an Alpha Bitch, and a Nice Character, Mean Actor. If the character is sympathetic, it's often a device to show the character as insecure while picking up a cheap laugh along the way.

A subtrope of Comedic Underwear Exposure. Compare Dodgy Toupee and Hairstyle Malfunction for a non-clothing equivalent, as well as Fat Flex. Sister to Of Corsets Sexy and Of Corset Hurts.

Lisa's whale friend is turned into fashion for slobs.

Lisa's whale friend is turned into fashion for slobs.