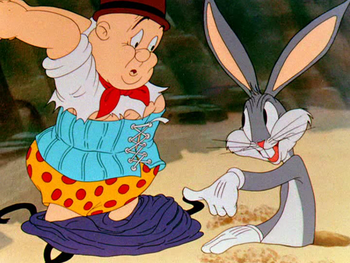 The Wacky Wabbit is a 1942 Merrie Melodies cartoon, directed by Bob Clampett and starring Bugs Bunny and Elmer Fudd.

The cartoon is centered on Elmer Fudd travelling through a desert to dig for gold to help out with the war effort. Along the way, he encounters rascally Bugs Bunny, who decides just for the hell of it to screw around with him for the rest of the cartoon.