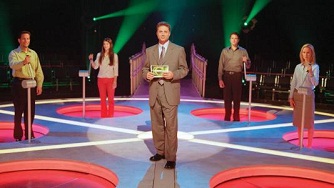 A GSN Game Show in which four contestants competed in a last-player-standing quiz contest. Each player stands on one of the six trap doors on the circular floor. A player who misses a multiple-choice question must play Russian Roulette, by pulling a lever to spin the "Drop Zones", to stay in the game.

The first question had one Drop Zone, indicated by a red border; each question after that added a Drop Zone until five were in play. Any contestant standing in a Drop Zone fell three feet (five feet in season 1) through the floor and out of the game. The last contestant in the game advanced to the Bonus Round for a chance to win up to $100,000.