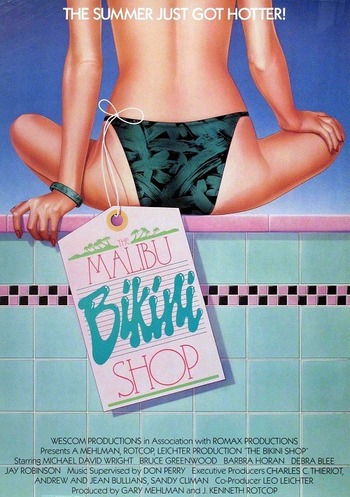 The Malibu Bikini Shop is a 1986 romantic comedy film directed by David Wechter about two guys (Michael David Wrightnote (the younger iteration of Michael Gross on Family Ties) and Bruce Greenwood) who, after their aunt drowns, inherit her boardwalk bikini shop.

Distributed by The Samuel Goldwyn Company, it practically flew under the radar when released (if anything, people saw it solely for the fanservice), and is perhaps best known for being where the song "The Girls of Rock 'n Roll

" originated before its Retroactive Recognition in The Chipmunk Adventure a little over a year later.

The film is available in its entirety