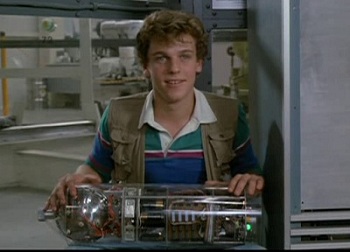 Apocalypse 1986? A boy and his homemade atomic bomb. Built for the science fair. Seriously.
Advertisement:

A 1986 thriller with liberal dashes of Black Comedy and Gallows Humor plus just a touch of hard science fiction. Belongs to the same genre as WarGames, as both films feature bright high school kids who almost single-handedly cause an international nuclear crisis. Although less high-spirited and possibly more Anvilicious than WarGames, The Manhattan Project is still good fun.

Paul Stephens (Christopher Collett) is a Teen Genius and High-School Hustler from Ithaca, New York (best known as being the home of Cornell University). His divorced mother (Jill Eikenberry) starts dating nuclear scientist Dr. John Mathewson (John Lithgow), who runs the lab at "Medatomics", ostensibly doing research in nuclear medicine. The Medatomics lab, however, is just a cover story for Mathewson's real work, which is refining plutonium to previously unheard-of purities for use in nuclear weapons.

Paul decides to steal plutonium from the lab and use it to build an atomic bomb, partly to Make A Point, but mostly Because He Can. Paul thinks, correctly, that he has the most epic Science Fair project ever, and enters it in a Science Fair in New York City. When Dr. Mathewson and the U.S. Army figure out what Paul is up to, they are not amused.

Features John Lithgow playing a good guy during his "serious" period, and a young Cynthia Nixon as the hero's girlfriend Jenny.