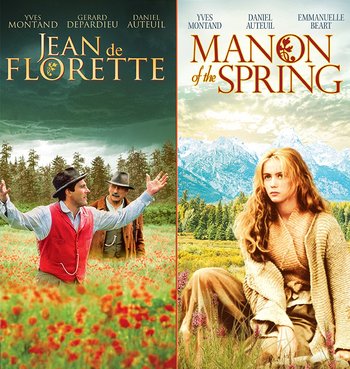 Think Game of Thrones, but with farming in Southern France instead of fantasy kingdoms.
"Remember, it's much easier to push something downhill than uphill, so push him in the direction where he'll fall."
— César Soubeyran
Advertisement:

Jean de Florette and Manon des Sources (Manon of the Spring) is a 1986 French movie duology concerning a city man and his family after they inherit a plot of land rich in resources in Southern France. They are adaptations of Marcel Pagnol's novels of the same name.

The first movie, Jean de Florette, involves the plotting of the farmer Ugolin (Daniel Auteuil) and his cunning uncle César (Yves Montand) he calls "Papet", as they work to subtly drive a young city man named Jean (Gérard Depardieu) off the plot of land he has inherited from his mother, Florette.

The second movie, Manon des Sources, takes place 10 years later and involves Jean's daughter, Manon (Emmanuelle Béart), as she solves the mystery of what happened to her father and deals justice to the village that condemned him.

An earlier film, also called Manon des Sources, was made in 1953, but due to writer/director Pagnol's dissatisfaction over the cutting of his intended four hour film led to the story being rewritten as a novel with the addition of a prequel, called Jean de Florette. The two volumes are known together as L'Eau des collines (The Water of the Hills). From these two books, the two films were eventually made.

Both films were critically acclaimed, and were nominated for and won numerous awards, including 10 BAFTAs. The second film significantly boosted the career of Emmanuelle Béart.